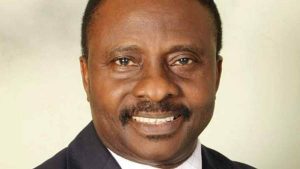 The Christian Association of Nigeria, (CAN) , has denied endorsing the Ekiti State governor, Ayodele Fayose, for president in the forthcoming 2019 general elections.

In a letter signed by Adebayo Oladeji, the head of media and communications to the CAN President, Samson Ayokunle, the association said media reports about an alleged endorsement of Mr. Fayose, attributed to CAN, emanated from a personal opinion of its general secretary, Musa Asake.

Mr. Fayose has declared his intention to run on the platform of the opposition PDP.

Several members of Mr. Fayose’s PDP including the party’s national spokesperson, Dayo Adeyeye, have criticised the Ekiti governor’s ambition saying the party had zoned the position to Northern Nigeria.

Media reports had quoted Mr. Asake as describing Mr. Fayose as a courageous man fit for the place of president of Nigeria, come 2019.

“Unarguably, you have done what many of our politicians, Christians in particular, do not have the courage to do. This is why I agree with you, hook, line and sinker,” Mr. Asake was quoted as saying, in his remarks about Mr. Fayose’s presidential ambition.

Although the reports noted that the endorsement letter was signed by Mr. Asake, rather than the usual signatory to letters attributed to the CAN president, Mr. Oladeji said some reports attributed the contents of the letter to CAN.

Mr. Oladeji said Mr. Asake’s stance was his personal opinion and should not be misconstrued as that of CAN or that the association had begun the practice of endorsing certain candidates for elections.

“Since the letter was leaked to the media, for whatever reasons, some prominent Christian stakeholders have been making calls to CAN President, His Eminence, Rev Dr Samson Olasupo Ayokunle, asking for the clarifications since there was never a time the matter was discussed by the leadership of the association. Hence the need for this statement.

“In the letter. Dr Asake stated it there clearly that it was his personal letter. This contradicts the impression being given by the media that CAN had endorsed the governor.”

Mr. Oladeji emphasised that “There was no time CAN or the President of CAN authorised such a letter.”

“It was the personal opinion of the General Secretary. However, anyone who wants to run for any political office in Nigeria has our goodwill in CAN and we would be praying for them if he or she is well qualified to contest, including the respectable Governor Fayose.

“Our prayer to God is to always get a godly, a detribalised and peace loving leader presiding over the affairs of the country.”