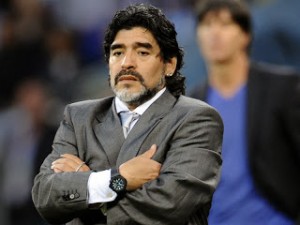 Former Argentine football legend, Diego Maradona stated his desire to have another coaching opportunity with the Argentina national team, after Tuesday’s 4-2 defeat in a friendly against Nigeria.

Nigeria fought back from two goals down in the match staged in Krasnodar, while Jorge Sampaoli’s side was without Lionel Messi for their second of two matches in Russia.

Maradona, a former Argentina captain and manager, published a comparative table on his Instagram account showing that his period as a coach of the team had the highest efficiency among all the managers that led Argentina since the 1970s.

“Who wins more ?? Let’s draw our conclusions, I’m mad because they give away our prestige, but the players are not the ones to blame, I WANT TO RETURN !!!” Maradona wrote.

In the graphic posted by Maradona, he achieved 75 percent efficiency, with 18 victories and six defeats in 24 matches during his tenure as Argentina coach, including the World Cup in South Africa, a tournament in which he was eliminated in the quarterfinals.

In second place is Gerardo Martino, who appears with 74 percent in 29 games.

Then Alejandro Sabella, runner-up in Brazil 2014, with 72 percent in 41 games, Alfio Basile and Marcelo Bielsa, both with 70 percent in 48 and 68 games, respectively.