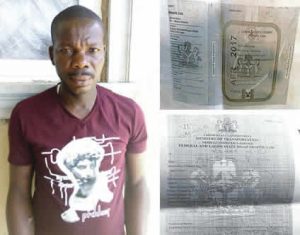 Mr. Oluwadamilare Afolarin, whose car got burnt on the premises of the Vehicle Inspection Service has been compensated by the Lagos State Government.

Oluwadamilare, who expressed gratitude to The PUNCH Newspaper, confirmed to our correspondent that he had received a cheque from the government.

He said although the money was not much, he hoped to buy another car with it.

A series of reports on the ordeal of the 42-year-old in the hands of officials of the VIS started in March 23, 2017.

It was reported that Oluwadamilare was flagged down by the VIS officials at Ilaje, Ajah, for allegedly driving a car with a cracked windscreen.

The vehicle was impounded, while he was issued an N80,000 fine for the offence.

It was reported that the father of three was about paying the fine into the VIS bank account when he was called by one Akeem, the deputy head of the Eti-Osa office of the agency.

Akeem was said to have informed Oluwadamilare that his car got burnt overnight, offering to compensate him with N200,000.

Akeem and Oluwadamilare later went to Alausa, Ikeja, the office of the director of the VIS, Mr. Gbolahan Toriola.

Both Akeem and Toriola were reported to have had a closed-door meeting, after which the painter, who had been asked to wait outside, was invited into the office.

Toriola allegedly accused Oluwadamilare of sneaking into the VIS premises and setting fire to the car.

He allegedly ordered that his shoes and phone be taken from him and he should be taken to the Ogombo Police Division, Ajah, where he was detained for about three days.

It was earlier reported that Oluwadamilare was released after he was allegedly agreed to sign an undertaking not to post about the incident on Facebook or report to the press.

In a follow-up, the state Director of Public Affairs, Ministry of Transportation, Biola Fagunwa, insisted that the victim burned the car on the agency’s premises, adding that his footprints were visible at the scene.

Fagunwa noted that his family told the government while begging for his release from detention that he was mentally unstable; claims the family denied.

Following the outrage that greeted the incident, the Lagos State Government set up a panel to look into the case, just as Oluwadamilare, his family members, Toriola, and other top officials of the government were invited.

At the end of the deliberation, the victim was reportedly asked to discontinue all publications and exercise patience for the government to get back to him.

The Lagos State Government later reviewed the operations of the VIS and took them off the roads.

Oluwadamilare confirmed that he has already been paid, “They have given me a cheque and I am in the bank to cash it. I will be getting another car soon. I appreciate The PUNCH Newspaper for helping me to get the compensation. I will forever be grateful.”