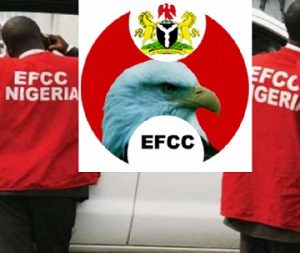 Officials of the Department of State Services and the Economic and Financial Crimes Commission were involved in a showdown for over 13 hours on Tuesday when EFCC operatives stormed the home of the immediate past Director General of the DSS, Ekpenyong Ita, to effect his arrest.

Ita, who served as the head of the DSS from 2010 to 2015, had been invited by the EFCC for his alleged role in the arms scam involving a former National Security Adviser, Col. Sambo Dasuki (retd.), and other service chiefs who have since been arraigned.

It was learnt that while other security agencies had cooperated with the EFCC and released their officials for probe, the DSS had refused to hand over its own officials to the anti-graft agency for over a year.

Following the refusal of Ita to honour a series of EFCC invitations, it was reported the operatives of the anti-graft agency, armed with an arrest and search warrants, surrounded Ita’s home at 46 Mamman Nasir Street, Asokoro as early as 4am to prevent him from escaping.

The EFCC operatives approached the premises and presented the warrant to the armed DSS officials securing the building.

However, as the EFCC officials attempted to enter, the heavily armed DSS officials, some of whom were wearing masks, refused to allow the EFCC men inside.

The DSS officials simply said they were acting on “orders from above.”

They also threatened to open fire on the persistent EFCC operatives.

The EFCC officials then retreated temporarily and cordoned off all roads leading to the property with a yellow tape which bore the words, ‘crime scene, do not cross.’

An EFCC official said, “Mr. Ekpeyong Ita is being investigated for offences bordering on alleged theft and diversion of public funds. Shortly after we arrived, the DSS reinforced its security presence at the property, with the deployment of about 30 armed operatives.

“The refusal of the DSS operatives to allow the EFCC execute valid search and arrest warrants is really worrisome. I don’t know whether it is within their brief to prevent a law enforcement agency from executing arrest or a search warrant on a property belonging to a retired member of staff of the agency.

“The suspect in question is not a serving officer of the DSS, which makes this action particularly reprehensible.”

It was gathered that when a member of the EFCC team attempted to take photographs, some DSS officials, including some wearing masks, cocked their guns but the EFCC officials accompanied by over 15 policemen, cocked their own rifles in return and called their bluff.

Meanwhile, a mild drama also played out at the official quarters of a former Director-General of the National Intelligence Agency, Ambassador Ayo Oke.

The EFCC said Oke who was recently sacked by President Muhammadu Buhari for allegedly stashing away N13bn in a house in Ikoyi, had been refusing to honour invitations for over three weeks.

The commission also obtained search and arrest warrants for Oke and his wife, Folasade, but were denied access by men of the DSS.

However, a source within the NIA said Oke did not ignore invitations but had written to the anti-graft agency informing it that he would do so at a later date.

The NIA official said, “The former DG honoured the EFCC’s invitation in Abuja but he was told to go to the Lagos office of the EFCC which is in charge of the case. He wrote to the EFCC informing the commission that he had not yet fully handed over to his successor and had not even finished moving his belongings from his official apartment.

“He told them to give him more time but they decided to surround his house with policemen.”

The source said the DG’s wife had travelled out of the country for medical reasons before she was invited and promised that she would return soon.

“Ambassador Oke was placed on suspension in May and his wife waited for over five months but when the report was not implemented, she could not wait any longer as she had a doctor’s appointment abroad. She was already out of the country when the EFCC invited her,” the source said.