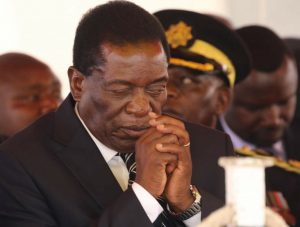 Emmerson Mnangagwa, whose removal as vice president by Robert Mugabe led to the resignation of the former leader , was sworn in as Zimbabwe’s new president on Friday.

“I Emmerson Dambudzo Mnangagwa swear that as the president of the republic of Zimbabwe I will be faithful to Zimbabwe and obey, uphold and defend the constitution and all other laws of Zimbabwe,” he said as he took the oath of office before the chief justice, watched by a jubilant crowd of tens of thousands of people.