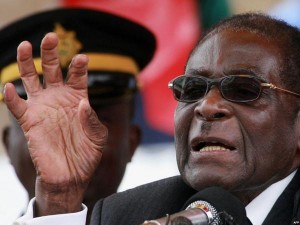 Leaders of Zimbabwe’s ruling ZANU-PF party are meeting on Friday to draft a resolution to dismiss President Robert Mugabe at the weekend, a senior party source said

The source said the leaders will lay the ground for his impeachment on Tuesday if Mugabe refused to stand down.

“There is no going back,” the source said, “If he becomes stubborn, we will arrange for him to be fired on Sunday. When that is done, it’s impeachment on Tuesday.”

Zimbabwe’s military said it was engaging President Robert Mugabe in talks on the way forward for the country and that it would advise the nation on the outcome as soon as possible.

The military added in a statement broadcast on Zimbabwean television that it had made “significant progress” in its operation targeting “criminals” around Mugabe.

Zimbabwe opposition leader Morgan Tsvangirai on Thursday urged President Robert Mugabe to resign in the interest of the country after the military seized power.

Mugabe is insisting he remains Zimbabwe’s only legitimate ruler and has balked at mediation by a Catholic priest to allow the 93-year-old former guerrilla a graceful exit after a military coup, sources said on Thursday.

“In the interest of the people, Robert Mugabe must resign and step down immediately,” Tsvangirai, leader of the Movement for Democratic Change, told a news conference, reading from a statement.

Earlier, the political opposition in Zimbabwe called for the intermediate installation of an interim government, a day after a surprise military takeover.

“At the moment the transitional government is the best way to go,” said Douglas Mwonzora, Secretary-General of Morgan Tsvangirai’s MDC-T party.

“We back the military move but the country should quickly go back a constitutional government.”

Armoured vehicles that were stationed at key government buildings during the political upheaval on Wednesday remained in place.

The soldiers appeared relaxed, even smiling and chatting with onlookers.

Most people were going about their daily business and children went to school.

Officials from the Southern African Development Community were also meeting in Botswana’s capital Gaborone later Thursday to discuss the situation in Zimbabwe.

“What is needed is an inclusive government to run the affairs of Zimbabwe until a time it is right to have elections,” said Didymus Mutasa, a longtime minister in Mugabe’s government, who was fired in 2014 for backing Joice Mujuru as the president’s successor.

Jacob Mafume, a spokesman of the People’s Democratic Party led by Tendai Biti, said that any interim government “should be inclusive of all the stakeholders including the church and all parties.”

While the army has said Mugabe is safe, there were mixed reports in the media about his wife Grace Mugabe’s whereabouts, with some saying she had fled the country.

Speculation had been growing before the coup that 52-year-old Grace was preparing to take over from her husband.

The potential ascendency appears to have faced resistance from senior military officials.

There was an uneasy calm on the streets of Harare, after initial jubilation on Wednesday when the army announced it had seized control from Mugabe, 93, who had been in power almost four decades.

Several Mugabe allies from his Zanu-PF party, including Finance Minister Ignatius Chombo, detained, some political players have been swift to show the army they’re on side.

A grovelling apology by Zanu-PF youth leader, Kudzai Chipanga, who had criticised the army only hours before, was published by state media late Wednesday.

“We are still young and make mistakes,” Chipanga said, adding that he was making his apology voluntarily and had not been coerced.

“I have personally reflected and realised my mistake,” Chipanga added.