Nigerian lawyer-turned-rapper, Folarin Falana, popularly known as Falz the Bhad Guy, has offered to show his birth certificate to everyone.

He made the offer on his Instagram page on Wednesday after his numerous fans expressed doubts over his age.

Falz had, on October 27, announced that he was 27 years old while dropping his latest album titled 27. He also promised to give top streamers of his songs N127,000.

Falz, was called to bar in 2012, after graduating from the Nigeria Law School, Abuja.

Falz is 27? One of his fans Elsie Godwin on his twitter handle asked

However, on November 1, the Whedone Sir crooner said he was hurt when people expressed doubts about his age. He, however, said in an IG video that he was willing to show his birth certificate to the public. 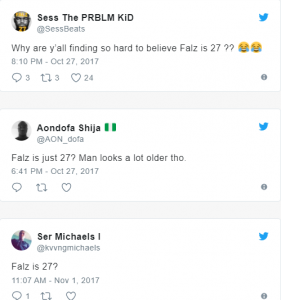