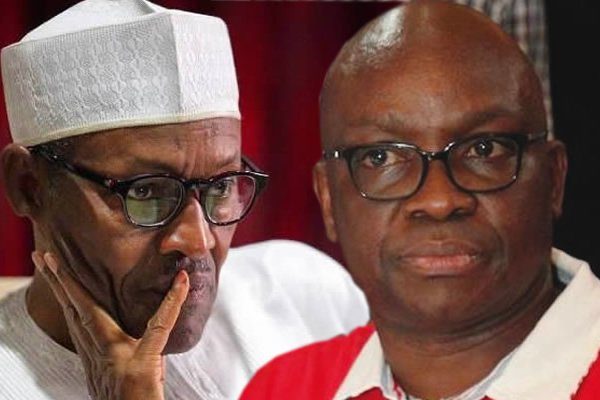 Governor of Ekiti State and chairman of the Governorship Forum of the Peoples Democratic Party (PDP), Ayodele Fayose has lamented ‎President Mohammadu Buhari’s refusal to wish him happy birthday.

Fayose on Wednesday marked his 57thbirthday in Ado Ekiti, the Ekiti State capital.

Speaking with newsmen, Fayose said he wondered why Buhari did not deem it fit to send him goodwill message through any of his media aides.

He said, ”My wishes on my 57th birthday as Ayo Fayose are many but one of them which will interest you is that I wish ‎President Buhari’s congratulatory call would have woken me up today as one of the governors in the country, as a father of the nation and as a leading ‎opposition figures in the country. A fearless youngman who believes that things should be done rightly, to show himself as a father of all, preaching that we must extend love to everybody not only. Those in his political party.

“The president would have made a difference if he had extended such gesture to others beyond his political party. Such a congratulatory message should have been conveyed through his minister of information. I would have loved to either wake up receiving a congratulatory call from him or read it in the papers. But since it is not coming, it is not a big deal to me and I take no offence on it.

“I am not Buhari’s enemy. Opposition is the strength of democracy, it ensures that the electorates get value for their votes. Those who criticise your government are not. Your enemies, they are catalysts to your growth as a government.

“My birthday will be celebrated with the common man on the streets. All the gifts I have received from family, friends and associates will be shared to men and women on the streets of my state. This was what I did last year.

“I remain a factor no one can ignore in this country. Apart from the fact that I am a leading opposition, Nigerians respect my voice, they believe that I don’t compromise the truth no matter whose ox is gored.”