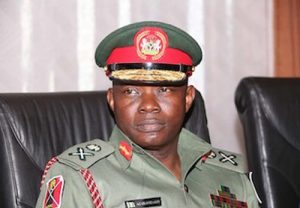 The Chief of Defence Staff, (CDS), Gen. Abayomi Olonisakin, on Saturday inaugurated 20 gunboats to help beef security in the Niger Delta region of the country.

Olonisakin said at the inauguration of the boats in Warri that the recent threat by the Niger Delta Avengers to resume hostilities in the region was a sad commentary on the collective security of the environment.

He expressed regret at the continued threat of violence, noting that the Avengers’ threat had dealt an unfortunate blow to the collective well-being of the oil-rich region.

The army chief said that the new boats would help boost the Navy’s operational capacity, especially in the effort to stamp out various threats prevalent in the maritime environment.

While acknowledging the right of people to agitation, Olonisakin said any agitation associated with violence was unconstitutional and would be firmly dealt with by the armed forces.

“There has been continuing militarisation and proliferation of weapons among militant groups in the Niger Delta.

“This has ended up in a sharp increase in the threat level in the region.

“The inauguration of these platforms today is in line with the programme of general preparedness, which the Nigerian Navy has continued to maintain effective deterrent and good operational posture.

“It has pursued this by generating adequate maritime leverage domain awareness,’’ he said.

Olonosakin commended the Navy for patronising indigenous companies to construct 16 of the gunboats.

The News Agency of Nigeria reports that the other four boats were constructed by a South African company.

The CDS said the success construction of the 16 boats was a clear testimony that with adequate encouragement, the underdeveloped technological capacity of indigenous companies could be harnessed for national development and improved security.

Earlier, the Chief of Naval Staff (CNS), Vice Adm. Ibok-Ete Ibas, had said that Nigeria relied on full based resources, particularly oil and gas as well as maritime based commerce, for sustainable national development.

“Our concern is to ensure that our maritime environment is safe.

“Unfortunately, the maritime environment is faced with sabotage on infrastructure, piracy and armed robbery among others.

“The Nigerian Navy has the mandate of safeguarding the maritime domain to ensure a healthy environment and other maritime interest that contribute to the national development,’’ he said.