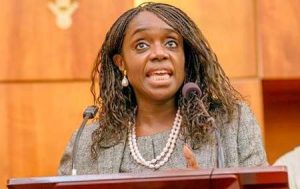 Minister of Finance, Mrs. Kemi Adeosun, has confirmed that a sum of N421.33m is ready to be paid to whistle-blowers for the November batch.

She said the amount included that of the whistle-blower for the cash recovered from a building in Osborne Road, Ikoyi, Lagos.

Adeosun disclosed this on Wednesday while answering questions from State House correspondents, after the weekly meeting of the Federal Executive Council presided over by Vice-President Yemi Osinbajo at the Presidential Villa, Abuja.

She said the money would be paid to the whistle-blower who signed the agreement and not any firm.

The minister also disclosed that the Federal Government would pay applicable taxes on the sum directly to the state government where the whistle-blower is domiciled.

She said, “The total amount, which also include Osborne Road, Ikoyi is N421, 330, 595. This is for the November batch and it is ready for payment.

“The only condition necessary is that the money will be paid to the whistle-blower who signed the agreement, not to any company.

“If we get the court judgement, we have to wait for three months to ensure that there are no encumbrances.”

She added, “We will also make sure that all applicable taxes are paid ahead. We will get in touch with the state government where the person is domiciled and we will pay the tax directly to the state and issue the tax receipt.

“We built in these procedures to protect the whistle-blower.”