Home News Feed Final Year Student Allegedly Stabs Fresher With Scissors | Photos
Facebook
Twitter
WhatsApp
An altercation with another woman over an incident has left an Imo State University student nearly dead after she was stabbed with a scissors. 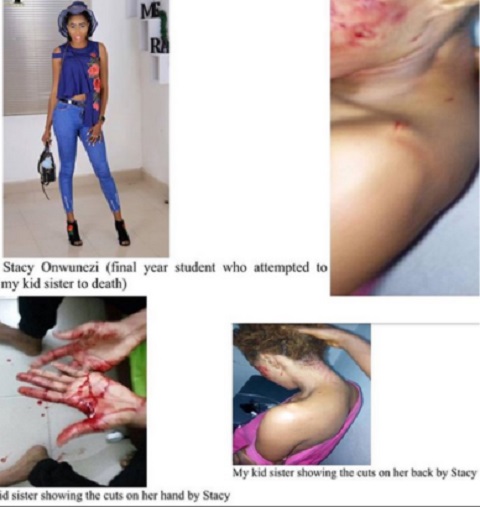 The sad story how an Imo state University 100 Level student identified as Glory Ezinne John was almost stabbed to death by her final year roommate has been revealed by a social media user, John Kingsley.
According to Kingsley who is a brother to the victim, said that Ezinne John was attacked and almost stabbed to death by the final year student identified as Stacy Onwunezi. The sad incident happened during an altercation.
He wrote: “The pictures above are that of my injured sister whose life is been threatened by her final year roommate.
The final year roommate by name Stacy Onwunezi, is a student of philosophy and religion of Imo state University (IMSU), while my kid sister’s name is Glory Ezinne John, a 100 level student of Education, guidance and counselling.
With the annoying and callous attitude of the Nigeria Police towards a citizen whose security right is infringed by another, I hereby desire justice. Stacy attacked Glory on Sunday, 19th November, 2017 with a scissor with the intention to kill her on mere argument of ‘’who took my cloth?’’ and ‘’if you did, please return it’’- my younger sister requested.
With the anger and hate in the lady’s heart, the scissor was used to cut her face and hands and she fled afterwards. Stacy went straight to the police station to file a report against helpless Glory.
But my younger sister, Glory, had to wait for the caretaker to come around so that she can report the situation to him. On the arrival of the caretaker she narrated the story and they went straight up to the state CID, Owerri.
On getting there, Stacy was seen laughing with the police officers in the station which stirred up some curiosity (if justice can be achieved with the familiarity with the officers of the law). On filing her report, Glory’s case was trivialized by the state CID.
I hereby request for justice for my sister, Glory Ezinne John (100 LEVEL) whose life is threatened by Stacy Onwuzie (400 LEVEL), Philosophy and Religion Department, IMSU. Thank you. By John Kingsley (sibling) 09056420148.”