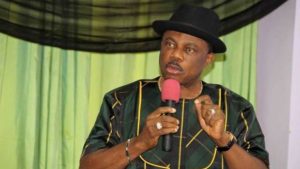 Governor Elect of Anambra State, Willie Obiano has described his victory in Saturday’s governorship election as showing a resolve by the people of the state to rise above varying interests and take full control of their destiny.

The governor disclosed this in an acceptance speech titled “Time to Build a New world” which he made after it became clear he had won the election.

Although, the Independent National Electoral Commission, INEC, as at the time of this report, had not declared Mr. Obiano winner, the electoral commission has announced that he won in all the 21 local governments of the state.

Mr. Obiano said the victory belongs to every Igbo man who is concerned about the place of Ndigbo in the nation’s polity. He said in the next four years, APGA will make inroads into other South-east and South-south states.

The governor called on his co-contestants in the election to see the result as a victory for all Anambra residents. He said the interest of the state is bigger than the contestants’ private ambitions and urged them to join hands with him to build a better place for the people.

He said by the victory, Anambra people have demonstrated that they are capable of taking charge of their lives and making difficult decisions that will brighten their future.

Mr. Obiano described the mandate as a historic call not to relent until the state has fully assumed the status of the model state of Nigeria. He said the victory is the final product of the combined efforts of brilliant men and women who sacrificed their personal comfort to ensure that Anambra’s steady march to progress is not derailed.

The governor expressed gratitude to all members of APGA for their steadfastness, the INEC for conducting a transparent election and the law enforcement agencies “whose alertness ensured that the people’s mandate is not thwarted.”

He charged the people to prepare for the speedy transformation of the state into a prosperous sub-national entity in the next four years.

According to him, the state has stepped into its finest hour and its journey into greatness is now assured.

He added that his government is open to new ideas and vision and is willing to work with anyone who has something to share that will make Anambra State great.