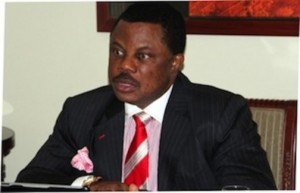 Governor Wille Obiano has warned his Commissioners, Special Adviser or civil servant that any of them  involved in any act of fraud or corruption in Anambra State will automatically be dismissed with immediate effect.

These stern warnings were handed down to commissioners and other top government officials by the state governor, Willie Obiano, at a meeting in Awka, the state capital.

The governor warned that with his re-election for a second term, governance would not be as usual.

He said that there must be a sense of commitment and seriousness in all public servants in the state who want to be part of the new revolution that will be introduced in the state to serve the people of the state better.

The governor disclosed that there will be checks and balance in every aspect of government business now and that all loopholes must be completely plugged to checkmate the activities of those who have in the past been sabotaging the efforts of the government to give qualitative service to the people of Anambra State.

He promised that during his second term in office things must change and be done within the ambit of the rules and regulations guiding government business and the civil service.

Governor Obiano advised anyone who feels that he or she cannot cope with the new order to be introduced to kindly take a bow or be forced out of service.

To demonstrate his determination to instill a new order into the public service, the governor personally scrutinised and vetted every proposal brought forward for approval by the state tenders board.

In his words “there is no room for any corrupt individual in my government; probity and accountability must be ensured hence forth in every government transaction.”

As it stands now that the distraction of elections are over, the governor is very prepared to give Ndi Anambra the best system of governance and abundant provision of democratic dividends in all the nooks and crannies of the state durinv his second term .

Governor Obiano gave assurance that he will not let Anambra State electorates down having reposed confidence in him by voting massively for him in the just concluded governorship election.

He expressed joy and happiness over the unflinching support given to him during his first tenure by members of the state executive council. The governor, however, promised that at the end of his second tenure, Anambra State would have become another Dubai in Nigeria and Africa.