Still basking in the euphoria of Banky W and Adesua Etomi’s wedding yesterday said to be the biggest Nigerian wedding in 2017, Nigerians have dug up Banky W’s 2016 Snaps where he vowed never to hold a huge Lagos Wedding.

Nigerians did an epic throwback to Banky w’s post about last year where he promised that he would keep the identity of his partner hidden till the wedding day.

Banky is quoted as saying:-

“Until I walk down the aisle with somebody, I’m never going to talk about somebody that I’ve been with. I don’t think it’s fair to the person because you open that person up.

Me, I can take the criticism and the comments on the internet and all of that stuff but somebody else that isn’t in that limelight doesn’t necessarily ask for that kind of criticism and backlash and slander and all of that and it’s tough to take for somebody that is not used to it so I don’t think it’s fair.”

Well, his wedding yesterday was a star studded one and here are his 2016 snaps; 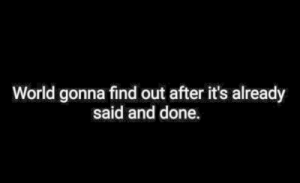 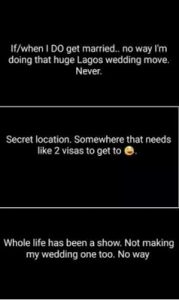 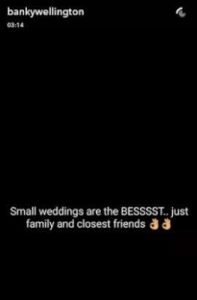