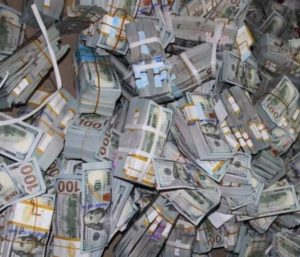 An acclaimed whistle-blower, identified as Abdulmunmini Musa, who allegedly disclosed the information leading to the recovery of the sum of $43.4m, N23.3m and 27,800 Euros from Flat 7 Osborne Towers, Ikoyi, Lagos State, has filed a suit demanding payment of whistle-blowing fee on the recovery.

The Economic and Financial Crimes Commission, the Federal Ministry of Finance, and the Attorney General of the Federation and Minister of Justice, Mr. Abubakar Malami (SAN), and three others were sued as the defendants in the suit filed before the Federal High Court in Abuja.

Three other defendants were those the plaintiff claimed participated in the whistle-blowing exercise over the Ikoyi funds said to have been kept in the building by the National Intelligence Agency.

They are Bala Maina, Steven Sunday, and one Mr. Sherrif.

The plaintiff, through his suit marked, FHC/ABJ/CS/1158/2017, sought an order directing the EFCC and the Federal Ministry of Finance to include him as a beneficiary of the 2.5 to 5 per cent of the whistle-blowing fees or monetary percentage of the entitlement to be paid to Maina, Sunday and Sheriff.

He also sought, “A declaration that the plaintiff, the 4th, 5th and 6th defendants actively participated and are instrumental to the whistle-blowing or disclosure of information disclosed to the 1st defendant staff or officers which resulted to the 1st defendant’s (EFCC’s) recovery of the sums $43.4m, N23.3m and 27,800 Euros at Flat 7 Osborne Towers. lkoyi, Lagos State.