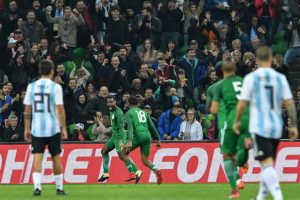 The Super Eagles of Nigeria defeated Argentina after going down 2-0 in the early stages of the game to defeat the South American giants 4-2 in Russia.

Nigeria, who started with Daniel Akpeyi in goal, started the game with frayed nerves fell behind in the 27 minute after the keeper’s blunder handed the Argentines a free kick, which Ever Banega converted. Manchester city’s forward, Kun Aguero, increased the tally to 2-0 inside the 37th minute.

The Super Eagles displayed a fantastic comeback spirit towards the end of half time when Leicester forward Kelechi Iheanacho began Nigeria’s fightback with a curling freekick that beat the Argentine’s goalkeeper.

Arsenal forward played himself into the scoresheet, grabbing a brace in the 52nd and 73rd minute, while debutant Brian Idowu added to the in the victory in the 54th minute.