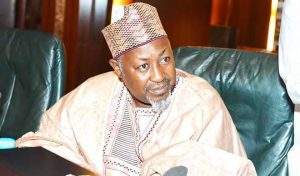 Governor Muhammad Badaru of Jigawa State on Tuesday presented a budget of N134.17 billion for the state’s 2018 fiscal year to the state House of Assembly.

Mr. Badaru, who tagged the appropriation bill as “Budget of Economic Diversification and Self Sufficiency’’, said “it is slightly above 2017 budget by 3.3 per cent”.

He told members of the House that “in line with the focus and contents of our medium term expenditure framework and policy thrust of the 2018 budget, I present to you highlights of the 2018 proposed budget.

“As I mentioned before, the 2018 budget will, by and large, be a continuation of the current budget dubbed `Budget of Sustained Economic Growth and Social Transformation,” he said.

“Based on the consolidated position of the revenue and expenditure estimates, the 2018 Appropriation Bill is proposing N134.17 billion, about 3.3 per cent above the 2017 budget.”

“Taking into account, the sums of N1.6billion earmarked for Stabilisation and Contingency Funds, the total retained revenue allocated to the various expenditure components of the Budget is N132.57 billion.

“It is worthy of note that incomes reflected against Local Government Contributions for Primary Education Personnel and Primary Healthcare Staff is simply a matter of budget and accounting principles.

“These are normally reimbursements to the State based on deductions at source.

“As earlier mentioned, out of the total projected income, the sum of N1.6 billion is proposed to be set aside for Stabilisation and Contingency Funds.

“This leaves a retained revenue of N132.57 billion shared among the major expenditure components.

The components include “Recurrent Expenditures consisting of Personnel Costs, Overheads, Consolidated Revenue Fund Charges and Other recurrent expenses relating to service delivery are earmarked the sum of N65.535 billion, equivalent to about 48.8 per cent of the total income.

“It is worthy of note that while total recurrent expenditure has grown by almost 10 per cent relative to the approved estimates in 2017, the overhead cost elements have actually declined by about 2 per cent.

“In other words, increase in recurrent expenditure was mainly accounted by personnel cost due to the recruitment in 2017 and new ones expected to be done in 2018.

“Capital Expenditure is earmarked N67 billion, accounting for about 50 per cent of the total expected income. This is about 0.7 per cent below the 2017 initial approved estimates.

Responding, the Speaker of the Assembly, Isa Idris, commended the governor for presenting the budget on time, pointing out that it would give the House an ample time to scrutinise it.

Mr. Idris promised to ensure passage of the bill in line with procedure and provisions of the house standing rules.