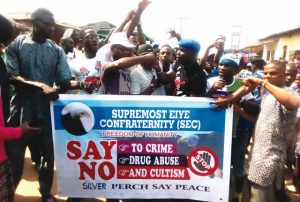 Some youths at Imota area of Lagos State surrendered their arms and renounced cultism, they were seen smoking Indian hemp to celebrate their cultism renunciation on Wednesday.

The act was observed newsmen shortly after the state Acting Commissioner of Police, Edgal Imohimi, addressed the press in company with the two former leaders of the Eye and Aiye confraternities.

The renunciation was held at the palace of Ranodu of Imota, Oba Ajibade Bakare-Agoro, and was presided over by Imohimi, who displayed guns, cutlasses and axes recovered from the residents.

The two groups also chanted their respective fraternal songs and exchanged occult pleasantries after the renunciation.

Earlier, while speaking to journalists, Imohimi said the renunciation was the outcome of the state police command’s emphasis on community policing.

He recalled that a similar event was held at Ijede, Ikorodu recently, where about 500 persons renounced cultism, urging other communities in the state to follow suit.

The CP said, “Over 120 youths have voluntarily renounced cultism and handed over their weapons to the police. The significant thing about this process is not the number of those renouncing cultism or the quantity of arms they tendered. What is most significant is that a process has started, whereby the youths themselves are now indicating interest not only to renounce cultism and other forms of crime, but also to take up vocational jobs and be integrated back into the society as responsible men and women. Their profiles will be taken and rest assured that this process is credible.

“Another thing is that this was powered by the Oba of Imota, which shows that our strategy of community policing and community safety partnership is working and yielding desired results. Monarchs, chiefs and senior citizens of communities have a strong role to play in their various communities. They should use their positions to call on youths to renounce cultism, drug abuse and other crimes.”

The ex-leader of the Aye Confraternity, Joseph Fasasi, said they decided to turn a new leaf following entreaties by the monarch and other community leaders.

He promised that the two groups would henceforth maintain peace in the neighbourhood.

He said, “My parents are from this community and we don’t want fights any more. If we continue to fight, peace will not reign. Residents are leaving the community. Tenancy is cheap because people are afraid to live here. That was why we called one another and decided to let peace reign.”

A former top member of Eye Confraternity, Prince Bolatito, who spoke for the leader of the group, popularly called Spirit, said, “We (Eye and Aye members) have started going to pubs together. There is no more violence. We will hand over whoever refuses to shun violence to the police.”

The Oba of Imota, Bakare-Agoro, said the youths swore at an ancestral shrine in the community not to return to their old habits, adding that whoever failed to keep to the oath would die.

He said, “I feel elated today. There is no year in the last seven years that they would not kill one another. The police would come to arrest some of them, but the kingpins would run away. This process (renunciation) started over a month ago. I consulted with them in privacy in the palace.

“They will not go back to cultism because they have been to the traditional shrine where the first Oba of Imota once lived. We asked them to swear that if they returned, they would die within three days. I have advised them that there is nothing in crime. For all those who are running around because somebody wants to kill them, if the fight ceases, they will be able to go back to work and live productively.”

The Chairman, Imota Local Council Development Area, Wasiu Kunle-Agoro, said the council, the state government and political office holders from the community would work together to engage the youths in lawful activities.

He said, “We have made a plan where some of these members will be absorbed into vocational jobs. We want them to be gainfully employed so that idle hands will no longer be tolerated. They are tired of the activities of their groups and came out voluntarily to renounce their membership.”

A member of the Lagos House of Assembly representing Ikorodu Constituency II, Nurudeen Solaja, urged the residents to sustain the friendship shown during the event.

“We have made provisions for vocations such as computer training for them. Some of them are graduates; we will try as much as possible to secure jobs for them,” he added.