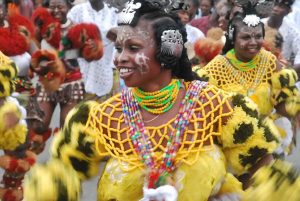 The Lagos State Government on Thursday said it would hold a 12-hour street carnival on the popular Oba Akran Avenue, Ikeja, on December 3 ahead of the Yuletide.

The Special Adviser to Gov.Akinwunmi Ambode on Tourism, Arts and Culture, Mrs Adebimpe Akinsola, at a news conference in Alausa, said that the overall aim of the carnival was to boost the economy of the state.

Akinsola said that the event, formerly known as Lagos Street party, had metamorphosed into a carnival which would take place on the whole stretch of Oba Akran Road from noon till midnight.

She assured that arrangements were in place to ensure maximum security and traffic control.

Akinsola said that alternative routes would be provided to motorists so that they do not experience pains as a result of the closure.

She said over 700 revellers were expected to attend the carnival in colourful costumes, design and animation in a controlled procession.

According to her, there is provision for virtually all categories of people from kids, adults to the aged.

She said that the carnival would be used to showcase the abundant indigenous culture, food and lifestyle of Lagos.

Akinsola said that besides entertainment and fun making, the carnival would offer upcoming artistes and tradesmen the opportunity to exhibit their skills and market their products.

Earlier, the Commissioner for Information and Strategy, Mr Steve Ayorinde, said the objective of the carnival was to make Lagosians unwind, relax and allow small-scale entrepreneurs to make brisk businesses.

Ayorinde said it would as well showcase the diversity of Lagos culture.

He said that the event would also showcase veteran and new artistes in the music industry and comedians.