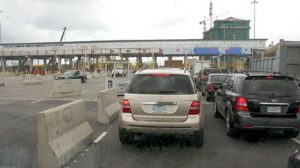 The Lagos State government has halted the proposed tariff hike on Lekki-Epe Expressway and Lekki-Ikoyi link bridge by the Lekki Concession Company, LCC.

Steve Ayorinde, the Commissioner for Information and Strategy, in a statement on Friday said the state government had directed the company to put the decision “on hold” as the necessary consultations with stakeholders are yet to be concluded.

“While government recognises the need for periodic review of tariffs and any other levies appertaining to road infrastructure maintenance in the state, the public and critical stakeholders as the ultimate beneficiaries of such facilities must always be carried along at all times,” Mr. Ayorinde said.

“Therefore, the proposed tarrif hike cannot be effected at this period in the interest of the public, while further consultations continue.”

The government’s decision to halt the proposed hike came just as thousands of Lagosians begun signing an online petition to protest the plan.

The tariff, which was increased by between 20 and 90 per cent, had been billed to become effective on November 8.

The online petition, initiated by Ngozi Ihedigbo, said the LCC, the operator of the toll plazas, imposed the “increment on us with absolutely no explanations.”

“Nigeria is a country in recession, people have no jobs and the ones with jobs can hardly survive on their salaries,” the petition began.

“Yet all the government is doing is impose hardship on innocent people for their selfish gain. There is no reason why there should be an increase on the Lekki-Victoria Island toll and we need this action to be stopped.

“We can no longer sit and fold our arms and say ‘it’s business as usual.’ We pay taxes, even though we do not see any major improvements to quantity these payments. We are our own government as we provide our own water, light and in most cases our road. Yet all the government does is take, take and take from us.

“The Lekki-VI fare should actually be going down, rather there is a 70 per cent increase in toll fee starting November 8th 2017. Did anyone get a 70 per cent raise on salary? Did Nigeria inflation go up by 70 per cent? ”

As at 9 p.m. on Friday, more than 5,000 persons have signed the petition, less than 12 hours after it was uploaded on online portal, CitizenGO.

According to the LCC, the new tariff for saloon cars at the Admiralty Circle Plaza (along the Lekki-Epe expressway) will be N200, from N120; sports utility vehicles will pay N400, from N300; while commercial buses, arguably the worst hit, will pay N150 from N80.