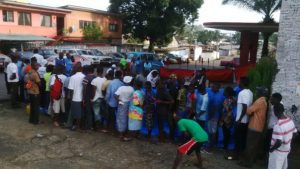 The National Elections Commission of Liberia has suspended electoral activities ahead of the November 7 run-off presidential elections in compliance with an order of the country’s Supreme Court halting the process.

George Weah of the opposition Coalition for Democratic Change and Joseph Boakai of the ruling Unity Party received more votes than the rest of the other candidates in the presidential race, thus qualifying them to participate in a runoff election.

Weah obtained 38.4 per cent of the total valid votes in the presidential race on October 10, while Boakai had 28.8 per cent.

NEC had earlier announced that the runoff would be held next Tuesday.

The chairman of the commission, Jerome Korkoya, announced the suspension of electoral activities at a press conference in Monrovia on Wednesday evening.

Korkoya said the November 7 run-off was unlikely, as the commission had already started losing days for preparation due to the temporary Writ of Prohibition issued by the apex court on Tuesday.

“The loss of today (Wednesday) due to the order already means the Nov.7 date that was set for the run-off presidential elections does not look possible to meet.

“Prior to the stay order, election preparations were on track as ballot papers arrived as scheduled on Oct. 28.

“Packing had been on-going and ballot papers and other sensitive materials were being prepared and dispatched to centres across the country.

“Parts of the shipments of materials had already arrived in Maryland, Grand Kru, River Gee and Grand Gedeh counties at the time of the order,” he said.

Korkoya explained that distribution of the remaining materials to Maryland, River Gee, Nimba, Margibi and Bong counties had been scheduled for Wednesday.

“That was suspended, and in some cases, the materials already in transit as of the time the court order came were recalled to the commission’s warehouses,” he added.

He stated that training of NEC staff had also been suspended.

“Magistrate and election supervisor training was completed before the stay order was issued.

“Materials for training that was scheduled to commence today (Wednesday) for presiding officers from across the country had arrived at the training centres at the time of the order.

“Training of polling staff scheduled for the Nov. 3 and 4 is suspended.

“The training of all staff was supposed to be completed on Nov. 5 to allow staff members to reach their polling places,” he said.

Korkoya said NEC had also asked its partners carrying out civic and voter education activities across the country to stay action.

The Supreme Court had ordered the suspension of all electoral activities for the run-off until it considered an application challenging results of the first round of elections held on Oct. 10.

The application was filed by the presidential candidate of Liberty Party(LP), Mr Charles Brumskine, who finished third in the first round.

Brumskine had alleged fraud, late commencement of voting and disenfranchisement of LP members and supporters at some polling centres.