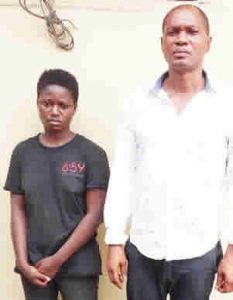 A 37-year-old man, identified as Emmanuel Ebuzoma,has been arrested by the Zone 2 Police Command, Obiang, Lagos for allegedly defrauding relatives and friends of some National Assembly members in a police recruitment scam.

The Delta State indigene was alleged to have obtained a pre-registered SIM card with the name of a former Inspector-General of Police and Chairman of the Police Service Commission, Dr Mike Okiro.

Ebuzoma was reported to have obtained telephone numbers of senators, members of the House of Representatives and governors, whom he sent bulk text messages to, requesting contacts of four people they wanted to help into the Nigeria Police Force.

Some of the government functionaries were said to have sent numbers of their relatives and friends to the suspect, who immediately contacted them, demanding various sums of money for registration into the Force.

The Zone 2 Police Public Relations Officer, SP Dolapo Badmos, said the suspect had five account numbers into which the applicants paid between N25,000 and N50,000.

She said, “The Chairman of the PSC, Dr Mike Okiro, got complaints from some members of the public that a syndicate was using his name to defraud people. He became worried and wrote a petition to the Assistant Inspector-General of Police, Zone 2, Adamu Ibrahim.

“The petition was forwarded to the Public Complaints Bureau and police operatives swung into action. Detectives tracked the suspect to Onitsha, Anambra State, where he was arrested despite his cleverness.

“In the course of investigation, we discovered that he had accomplices, who assisted him in getting account numbers of innocent residents, into which applicants paid various sums of money. He never used his own account number so as not to be caught.

“Again, when you dial the phone number he uses to call through True Caller, a telephone application, it will bring out the name of Dr Mike Okiro. We discovered he had help from some agents of a telecommunications company.

“Actually, he started the criminal act in October 2016 and from our checks on all the account numbers, he has realised about N4.5m. Most of his victims came from senators and House of Representatives members.”

The suspect, who confessed to the crime, said he had only made N400,000, adding that he got the money from those referred to him by some members of the House of Representatives.

He said, “I was at home one day when I decided to browse on my telephone. I saw the phone numbers of some senators, governors and House of Representatives members on the Internet. I decided to try if I could make money from them.

“I sent bulk text messages to them. I sent to six House of Representatives members, telling them that I was Mike Okiro and that they should send me four names of their candidates for police recruitment.

“When I sent the messages, four of them responded. They sent four names each with the telephone numbers of the applicants. I immediately sent text messages to those people, asking them to go to a bank and pay for their training kits and afterwards report at Abuja. I collected between N25,000 to N30,000 from each person.

“A girl supplied me account numbers into which payments were made. We had about four account numbers and we had withdrawn close to N400,000. There is a place in Onitsha where we buy pre-registered SIM cards. That was where I got the telephone number I used.”

She said, “A friend of mine, Chidiebere, had collected my account number, saying she was expecting someone to send money to her. When I got an alert of N70,000, she told me a man would come for it.

“He (Ebuzoma) called shortly afterwards and we met at a bank where I withdrew the money. He gave me N5,000 from the money and said I should take N4,000 and give Chidiebere N1,000.

“Later, he asked me for another bank account. He said my account had been blocked. I sent him three account numbers and told him to pick one from them. Since we met, I have withdrawn about N290,000 for him and he has paid me a total of N26,000.

Badmos, while warning job seekers to beware of fraudsters demanding money in exchange for employment, said the suspects would be arraigned in court at the end of investigations.