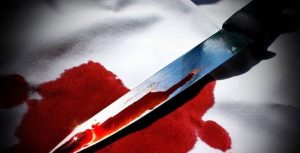 A man identified as Enu from Emu-Obodeti in Ndokwa West LGA of Delta State, yesterday chopped off neighbor’s flesh in Port-Harcourt over a foiled attempt by the neighbour who intervened as he attempted to allegedly attacked his own wife.

According to reports, the incident happened yesterday when the neighbor (victim) by name Tornu Bari aka National escorted Enu’s wife back home after she received a distress call from her husband.

Enu and his wife prior to the time of the incidence have been having series of issues and misunderstanding which led to Enu allegedly threatening his wife of murdering her, which made the woman run for her safety to seek refuge in Tornu’s nephew’s house where he lives with his wife.

Yesterday night, Enu’s wife received a distress call from her husband saying her attention is needed urgently at home as one of her child is seriously sick.

Considering the time and how the call came, she requested that Tornu escorts her home without knowing it was a ploy by her husband to deceive her back home to murder her as he had earlier threatened, but unfortunately for him, as soon as he was about attacking the wife who stepped in first, Tornu intervened and out of anger that Tornu had foiled his plans, then went after Tornu with a broken bottle and chopped off a pound of flesh from his right hand.

Tornu has since been admitted at Life Forte Hospital in Rumuolumini, off Iwofe road, Port-Harcourt where he has been recommended for a plastic surgery, meanwhile, Enu have been on the run as the police have been on his trail.