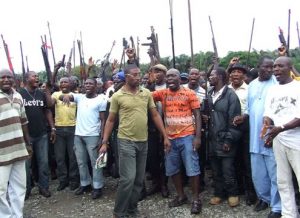 A militant group in Ondo State, United Sea Wolf Avenger, said politicians in the state had hijacked the Federal Government’s Amnesty programme in the state by allocating the slots to their children, friends and political allies.

The group made the allegation in a statement in Lagos on Thursday, signed by its leader, Gen. Deji Ehinmowo, Secretary, Gen. Akinfemi Raymond, and Adviser, Gen. Ogbaro Ariyo.

The Ondo State Government, had on Oct. 23, announced that the Federal Government would on Nov. 9 incorporate ex-militants in the riverine area of the state who are willing to submit their arms for the programme.

The militant group expressed regret that its members of over 400 from five camps in the state were neglected and not incorporated into the programme.

“We humbly want to alert Nigerians and the Federal Government that politicians in Ondo State are about to compromise the standard and integrity that the Nigerian security personnel has built over the years by hijacking the second phase of the amnesty programme.