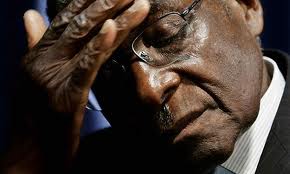 Things seem to be going from bad to worse for the embattled Zimbabwean President, Robert Mugabe as only  five cabinet ministers and the attorney-general turned up for a meeting called by President Robert Mugabe as 17 others opted to attend a meeting to plan the 93-year-old leader’s impeachment, sources have said.

The meeting was the first called by Mr. Mugabe since a military takeover on last week.

Mr. Mugabe faces the start of an impeachment process later in the day as his party seeks to end his nearly four decades in power.

ZANU-PF plans to bring the motion in parliament after a Monday noon deadline expired for the 93-year-old leader to step down.

Mr. Mugabe led the country’s liberation war and has ruled since independence in 1980 but is seeing the swift erosion of his power.

He has won a series of elections but is viewed by many in Africa and beyond as a leader who has crippled his country by holding on to power too long.

He called for the weekly cabinet meeting on Tuesday.

Zimbabwe’s information minister said on Tuesday he did not know if ministers would attend the cabinet meeting.

The army seized power because Mugabe sacked Mnangagwaident Mnangagwa to smooth a path to the presidency for his wife, Grace, who is unpopular with many Zimbabweans.

Reuters reported in September that Mr. Mnangagwa was plotting to succeed Mr. Mugabe with army backing at the helm of a broad coalition.

The plot included a plan for an interim national unity government that would have the blessing of much of the international community and allow for Zimbabwe’s re-engagement with the outside world.

The former vice president was a key lieutenant to Mr. Mugabe for decades and stands accused of participating in repression against Zimbabweans who challenged the leader.

Mr. Mnangagwa said he fled Zimbabwe because of a threat to his life after being purged from the ruling party.

He said he had been in contact with Mr. Mugabe and was invited to return but would not do so until his security could be guaranteed.

“I told the President that I would not return home now until I am satisfied of my personal security, because of the manner and treatment given to me upon being fired,” he said in a statement.

Mr. Mnangagwa said on Tuesday his desire was to join all Zimbabweans in a “new era” that would rebuild the economy for the benefit of all.

Zimbabwe’s top general said on Monday that the army’s intervention was progressing well.