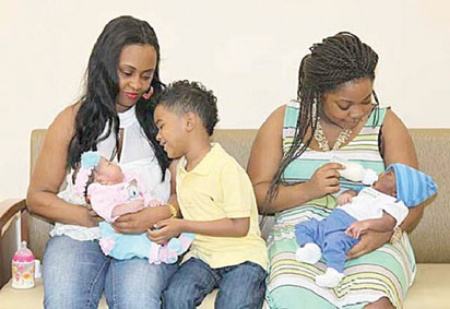 A mother and daughter from South Africa got pregnant for the same man and gave birth to their babies just four days apart.

In a related event, a Syrian mother and her daughter have given birth at the same time after undergoing Caesarean Sections together at a Turkish hospital.

The South African woman, 38 year old Mildred Mashego, learned that her 19-year-old daughter, Patricia Mashego, was also pregnant and that they would be due in the same month. The mother was furious that her daughter got pregnant out of wedlock; however she was even more shocked when she learned who the father of the child was.

Mildred was so angry that her daughter was secretly having sex with her boyfriend and was even considering abortion when she found out the truth. However, now that the children are born the woman has forgiven her daughter for the sake of her grandson.

Vincent Malumane, the father of the children, admitted that he was having sex with the mother and the daughter secretly behind the backs of both women.

“I cannot go back now and explain what happened. All we have to do is focus on making sure that the children are properly cared for,” said the man. The two women gave birth just four days apart: first the daughter, then the mother. Both gave birth to healthy boys, making the children brothers, a nephew, an uncle and a grandson.

Meanwhile, a Syrian mother and daughter have given birth at the same time after undergoing Caesarean Sections together at a Turkish hospital.

Fatma Birinci, 42, gave birth to her child at the same time as her daughter Gade Birinci, 21, in the Turkish city of Konya. The pair fled their native country three years ago because of the devastating civil war and found out they were pregnant in the same week.

The two new-born boys have been named Recep and Tayyip, the first two names of the current Turkish president Recep Tayyip Erdoan, according to Turkish news outlet Ensonhaber. Erkan Ata_, the chief physician of the hospital, visited the family in the hospital room after the successful birth.

He said: ‘This is an event that I have never heard of.  They have escaped from the war into our country and have taken refuge in Turkey for three years.’ Doctor of Gynecology and Obstetrics Naim Unsal called the birth a ‘miracle.’

Unsal said the mother’s previous births were all  Caesareans. It is not yet known where the fathers are or if they witnessed the birth.