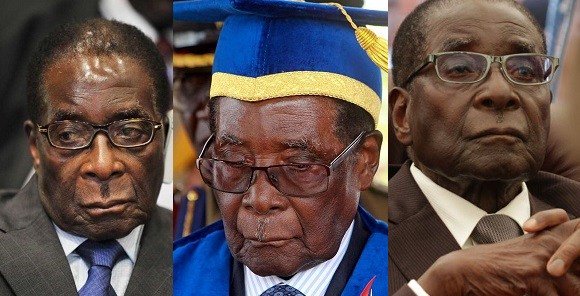 Zimbabwe President Robert Mugabe is refusing to eat in protest against his confinement, one of his close family members has told MailOnline.

The frail 93-year-old has not accepted any food since Saturday, the source revealed, as he continues to be held under house arrest at his Blue Roof mansion.

Mugabe’s nephew Patrick Zhuwao said on Saturday that Mr Mugabe was ‘willing to die for what is correct’.

A Zanu-PF minister confirmed to MailOnline that Mr Mugabe is also refusing to speak as part of his days-long protest.

‘The old man has been trying a lot of various tricks since last night,’ the minister, who asked not to be named, said. ‘Hunger strikes, making threats and refusing to talk.’

Zimbabwe’s ruling ZANU-PF party held a special meeting on its central committee on Sunday to remove Mugabe as its leader and kick him out, Chris Mutsvangwa, the head of the powerful liberation war veterans said.

Also on Sunday, Mugabe is set to discuss his expected exit with army commander Constantino Chiwenga, who put him under the house arrest that he is protesting with a hunger strike.

Mutsvangwa, who has led the campaign to oust Zimbabwe’s ruler of the last 37 years, said Zanu-PF’s meeting would also reinstate ousted vice-president Emmerson Mnangagwa and remove Mugabe’s wife, Grace, as head of the Zanu-PF Women’s League.

‘We are going all the way,’ Mutsvangwa said as he headed into the meeting, adding that Mugabe should just resign and leave the country. ‘He’s trying to bargain for a dignified exit but he should just smell the coffee and gap it.’

Zanu-PF Central Committee members stood and cheered as the official chairing the emergency meeting announced plans to remove Mugabe from his leadership post on Sunday.

Obert Mpofu told the committee that they were meeting with ‘a heavy heart’ because Mugabe had served the country and contributed ‘many memorable achievements’.

But Mpofu said in his opening remarks that Mugabe’s wife ‘and close associates have taken advantage of his frail condition’ to loot national resources. The party will also discuss reinstating recently fired Vice President Emmerson Mnangagwa.

The army threatened to let a mob lynch the dictator if he didn’t stand down, MailOnline revealed on Saturday. Now Mugabe has responded by rejecting all food.

‘If he dies under military custody, even by natural causes, then the army will be held responsible by the international community,’ the family member, who asked not to be named, said. ‘That is how the president is trying to put pressure on the army.’

The family member also said that Grace Mugabe was by her husband’s side at the Blue Roof mansion yesterday, and is thought to still be there today.