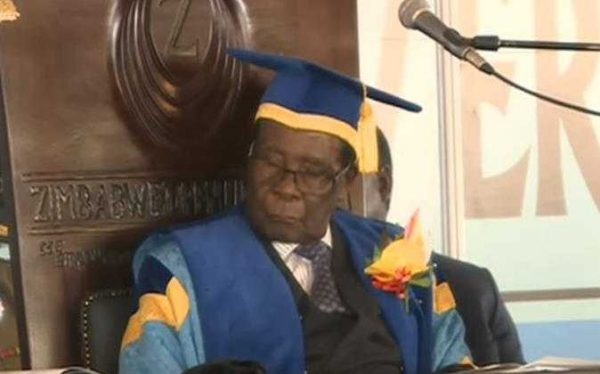 Zimbabwean President Robert Mugabe has made a first public appearance since the army took over earlier this week.

Mugabe, who has been under house arrest since the military action Wednesday, was greeted by cheering crowds as he attended a university graduation ceremony in Harare on Friday.

The 93-year-old appeared at the university without his wife, Grace Mugabe, whose whereabouts are still unknown.

Dressed in a blue academic gown and hat and surrounded by security personnel, Zimbabwe’s long-time president declared the ceremony open with a short speech.

His surprise appearance may be the army’s way of maintaining that their action was not a coup as is being widely reported.

The nonagenarian has so far refused to step down, amid mounting pressure from the army and opposition group, particularly former Prime Minister Morgan Tsvangirai, for him to resign and allow a smooth transition.

It is understood that the military first wants to reinstate former Vice President, Emerson Mnangagwa as first vice president and then as leader of a transitional administration that will usher in a new democratic era for the southern African nation.

An army statement broadcast on Zimbabwe state television on Friday, said “significant progress” was made in mediation talks aimed at ending Mugabe’s military house arrest and restoring normalcy to the country.

Mugabe remains popular among some in the ruling Zanu PF and many Zimbabweans who consider him an African icon.

This explains some of the reluctance by the military in calling their action a coup, as they won’t only have external pressures to deal with, but the internal wrangling from many who’ll want Mugabe – the only president they’ve known – to exit the stage with dignity.