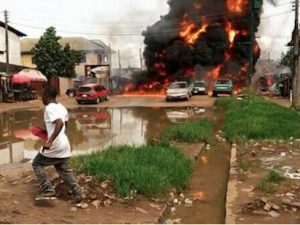 The Chairman of the Senate Committee on Interior, Sen. Andy Uba, has confirmed that Nigeria lost over N6tn worth of goods to fire disasters in the past five years.

This was made known in a disclosure at the International Fire Conference and Exhibition, organised by the Senate and House of Representatives Joint Committee on Interior, held on Tuesday in Abuja.

According to him, nationally, direct and indirect reported and unreported losses to the economy have been put conservatively at about N6 trillion.

“Alarming as these numbers are, they could be significantly higher if all the fire incidents in rural areas were recorded by an efficient operational fire statistics database.

“There is a general consensus on the need to mitigate this trend to stopping the fire before they start,” he said.

The lawmaker told the Federal Government to reposition fire service delivery to make it modern and efficient.

Uba, who noted that less than two per cent of Nigeria’s population was fire safety literate, called for media partnership on creating awareness on the issue.

Declaring the two-day event open, the Vice-President, Prof. Yemi Osinbajo, said that fire outbreaks were preventable given the necessary equipment and manpower.

The vice-president was represented by the Minister of Interior, retired Lt.-Gen. Abdulrahman Dambazzau.

He said that with support from the legislature and backing from the presidency, the Federal Fire Service would be one of the best in the world within the next five years.

“The effort by the National Assembly in the 2016 budget to procure five fire equipment is encouraging. This did not happen in the last 30 years or more.

“We are doing our best to ensure that Nigeria remains safe. There is a correlation between climate change and conflict,” he said.

The President of the Fire Disaster Prevention and Safety Awareness Association of Nigeria, Mr Badanga Lamidi, commended the senate for its effort in ensuring the safety of Nigerians.