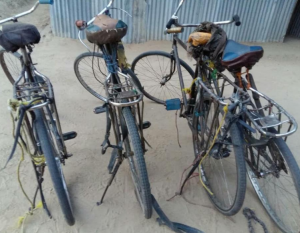 The troops sprung the ambush on the terrorists and neutralised 1 of them and recovered 4 Bicycles, some Mechanical tools which aids the terrorists vehicle movement, clothes and explosive wires from the ambush site.

Similarly, the troops of 151 Battalion, 21 Brigade Nigerian Army, also ambushed some unsuspecting Boko Haram terrorists who were attempting to cross into the Sambisa forest at about 7:40pm same day, along BOCOST-Bama road. Troops neutralized a large number of them while some of the terrorists escaped with gun shot wounds.