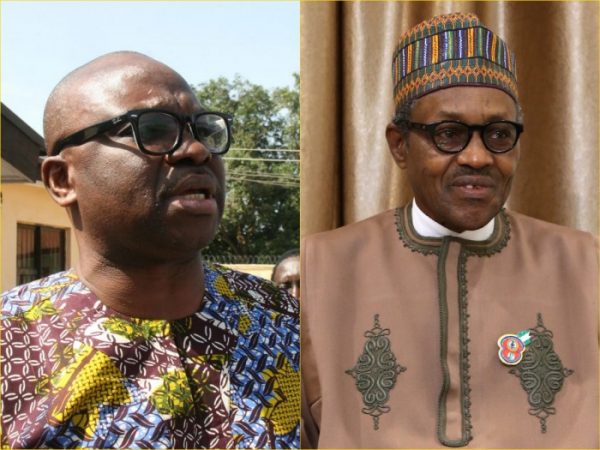 The governor of Ekiti, Ayodele Fayose has said President Muhammadu Buhari criticism by him or any other person, are acts to strengthen democracy and, as such, critics should not be seen as enemies.

“I am not Buhari’s enemy, the opposition is the strength of democracy; it ensures that the electorates get value for their votes,” he said.

“Those who criticise your government are not your enemies, they are catalysts to your growth as a government.”

On the occasion of his 57th birthday, Governor Fayose said his greatest wish was to wake up on Wednesday (November 15) to receive a congratulatory message from President Buhari.

He said: “The President would have made a difference if he had extended such gesture to others beyond his political party, such a congratulatory message should have been conveyed through his Minister of Information.

“I would have loved to either wake up receiving a congratulatory call from him or read it in the papers – but since it is not coming, it is not a big deal to me and I take no offence on it.”

The governor said one of the reasons he is being loved and cheered by all was because of his love for the ordinary man.

He said he has decided to celebrate his birthday with artisans, motorcycle riders, market women and men among other masses on the streets.

“My birthday will be celebrated with the common man on the streets. All the gifts I have received from family, friends and associates will be distributed to men and women on the streets of my state; this was what I did last year,” he added.