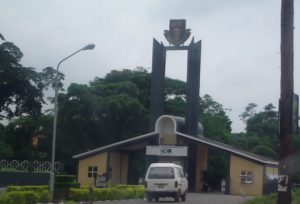 The Students’ Union President of Obafemi Awolowo University, Oyekan Edward, has been removed from office by the legislative arm of the union.

The parliamentarians accused Mr. Edward of convening suspected cultists to the university campus on Monday to disturb the peace of the institution.

The motion for the sack of the president was deliberated by 51 members of the Students Representative Council at their sitting on Saturday at the Awolowo Café.

They also suspended the Secretary General and Public Relations Officer of the union, Boluwajaiye Adeoluwa and Okediji Simon respectively, for not attending the parliamentary sitting and for being caught viewing a television programme at the common room of the university’s Awolowo hall of residence not far from the venue of the parliamentary sitting when proceedings were ongoing.

The suspension of the two officers is for two weeks. The parliament also prohibited absent parliamentarians from attending two subsequent sittings.

The sitting had in attendance 51 parliamentarians, with 37 of them voting for the removal of the union president while the remaining parliamentarians abstained from voting.

The OAU Students’ Union parliament, Odetoyinbo Fiyin, commended the resolutions, particularly the impeachment of the president.

“I strongly believe that the impeachment of the president has been lingering for a long time. He has committed so many misconducts, he is also known for absconding congresses.

“The parliament has done the needful. The resolution of the parliament which impeached the president is in fact a victory for all the members of OAU Students’ Union,” he said.

The clerk of the parliament, Iyiola Oluwatosin, while speaking with our correspondent, said that the president had to be removed because he has committed a lot of offences.

“The president was alleged to have invited cultists to come attack students in a parliamentary sitting that he did call, which held Wednesday November 1.

The cultists who came to attack our students were conveyed to and fro the university campus with the union bus and he masterminded the attack.

“This is an archetype that cultism is likely to return and history should not be allowed to repeat itself. The resolution of the parliament as regards the impeachment of the union president is valid and there is no going back.”

Falayi Temitope, the Speaker of the parliament, also spoke on the removal.

“He was impeached on the grounds of gross misconducts which included his involvement in an attack on students.

“He allowed students to be beaten blue black by cultists who were conveyed to and fro the university premises in a bus which was meant to be in the custody of the president. He did invite the cultists that came to attack students at the university students’ union building on November 1st, 2017”, he stated.

However, the embattled president of the union, Mr. Edward, in a statement, said his removal was null and void.

“My attention has been drawn to news flying around social media that the president has been impeached, the secretary general and public relations officer of the union have been suspended for two weeks.

“May I use this medium to inform you all that it is not true and not in tandem with the sacrosanct Constitution of our union.”

“The Parliament has 150 honourables and only 37 honourables voted for the impeachment of the president against zero. This is evident of their sinister plan and motive,” he said.

The clerk of the parliament, Mr. Oluwatosin, however explained that the removal of the union president is valid.

“At this point in time, permit me to clearly clear the general public that the president has been constitutional impeached according to Article V, Section 67 Subsection 1-2”

“Article V, S.67(1), observed that any officer of the Union shall cease to hold office if a motion for his removal is supported by two thirds of the member of the SRC present and voting at a meeting provided quorum is formed.

“Permit me to relate to you that parliamentarians present during voting were 51 and the quorum is (50), 2/3 of the member of SRC of 51 should be 34; and 37 voted which make it more than valid.

‘Hence, I implore the general public to deal with Mr. Edward Ibukun as a member of the union and not as president. It should be clearly noted again here that the parliament has been fair in dealing with the impeached president before now but bringing cultists to and out of OAU campus with the union bus is the acme of it.”

With the decision of the parliament as stated by the constitution, the speaker is expected to assume the office of the president of the union due to ongoing suspension of the vice president by the university management.

It was reported that the suspension of the vice president, Jacob Tosin, and director of socials, Adedayo Emmanuel, by the university management after both engaged in a bloody clash over money.

Meanwhile, some students of the institution have said that the removal of the president will divide the union and will not make it possible for it to demand the reinstatement of some students that were suspended by the university after protesting poor welfare condition on campus.

“I agree with the impeachment of the president. But it so painful that this will be the discussion of every student till the end of the administration. We don’t know the fate of the suspended students,” Bamimore Awoyemi, a student of English department said.

Another student who identified herself as Foluwake said: “I’m not surprised though. But I hope the leadership will leave their selfish interest to fight for the generality of OAU students.”