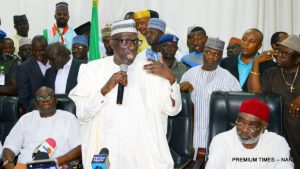 The National Executive Council of the Peoples Democratic Party (PDP) will meet on Thursday, according to reports, they are to discuss issues being generated by the convention.

It was gathered that some of the aspirants had met with Makarfi, asking why he had yet to name the convention committee members.

Adedoja told newsmen in Abuja on Sunday that he believed that the convention committee members would be named this week.

Also, Adeniran who was said to have visited Makarfi at his Kaduna home on Sunday, also expressed anxiety over the delay.

The former minister of education, who spoke through the Director of his Media Campaign Organisation, Mr. Taiwo Akeju, confirmed that Adeniran was at Makarfi’s house on Sunday.

He said the former governor of Kaduna State assured the team of his neutrality in the contest, adding that he also promised to get to the aspirants with a view to letting them have input in the membership of the committee.

Akeju said that Makarfi also promised to release the names of the delegates to the contestants before the convention.

Akeju said that Makarfi also informed the team that the much-awaited National Executive Committee meeting of the party would hold on Thursday in Abuja.

“He told us that NEC would hold in Abuja on Thursday where final decisions would be taken on the list of the convention members and other issues,” Akeju said.