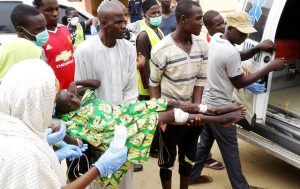 The police had confirmed 18 persons killed and 29 others wounded after four suicide bombers hit the area.

Police patrol and EOD teams have sanitised the area for residents to resume normal life.

NAN reports that the remains of the deceased were given mass burial at the Maiduguri cemetery.

Also, two more persons died while on admission at the University of Maiduguri Teaching Hospital and Specialist Hospital, Maiduguri.

Dr Bashir Tahir, the UMTH’s Chairman of the Medical Advisory Committee, said that five injured persons were admitted at the hospital.

Tahir disclosed that one of the five patients died on admission at the hospital, adding that the deceased suffered an internal injury.

He added that the patients were responding to treatment.

Danbatta revealed that one of the patients died at the hospital.

Mr Victor Isuku, the Police Public Relations Officer, said in a statement that the first explosion occurred at a prayer ground while three other explosions occurred at different locations in the community.

“A total of 18 persons, including the four suicide bombers died, and 29 others sustained injuries in the multiple explosions,” Isuku said.