Home News Feed Plans To Reintroduce Toll Gates Nationwide Concluded – FG
Facebook
Twitter
WhatsApp
The Nigerian government is hoping to boost the generation of revenue from the collection of toll fees across the nation to maintain the roads. 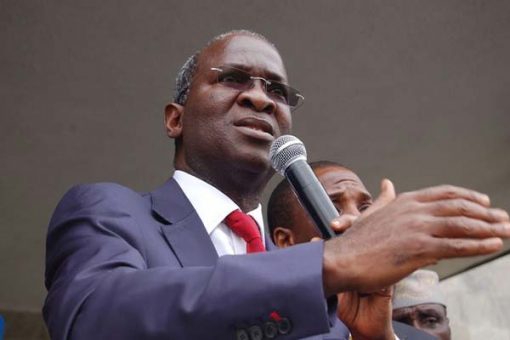 Babatunde Fashola, minister of power, works and housing, says the federal government has concluded the plan to reintroduce toll gates on various highways across the country.
He said this on Thursday while speaking at an interactive session with the senate committee on the Federal Roads Maintenance Agency (FERMA).
Fashola said they would be reintroduced in 38 points across the roads. He added that the toll gates would be brought back after the completion of the highways.
“We have concluded plans to reintroduce tollgates across the country,” Fashola said.
“It will be managed by the private sector and it will be located in the old places.
“We are only waiting for the completion of those roads before we introduce the toll gates.”
The minister added that road users would be able to pay for toll on the roads through their phones, and that the money realised would be used for the maintenance of the roads.
He also said the federal government does not intent to ask road users “to pay toll on a road that is not good.”
“While the construction (of gates) is going on, we are working on the design. We want to standardise the design so that people when we ask people to come and bid for the construction, we can control what they are going to construct,” he said.
“They are going to construct the materials we have prescribed. We can also control the price so that nobody is bidding with disparage prices; there will be the floor and the ceiling. Your price will vary according to how many plazas you build and not because you claim to have used ‘foreign’ materials.
“The last part we are working on is the software that drives the management, audit, and payment of toll fares.”