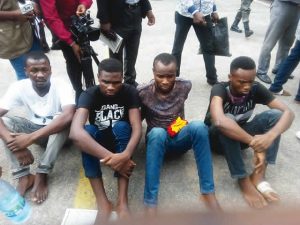 The Lagos State Police command have arrested the suspected killers of a chieftain of the All Progressives Congress, Emmanuel Uba, who was murdered in the FESTAC area of the state on July 21, 2017.

The police boss, Imohimi, said the case was transferred to the Inspector-General of Police Intelligence Response Team, which tracked down the suspects.

He added, “Luck ran out on the principal suspect, one Fatai Onifade aka Apase. A beretta pistol, one pump-action gun and two rounds of live ammunition, were recovered from the suspect.

“He confessed to the crime and led detectives to arrest three of his gang members – Michael Fashola, Mufutau Tokosi aka TK and Abidemi Adeleye, aka Baido. The suspects will be charged to court at the completion of investigation.”