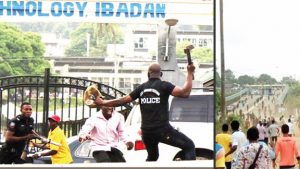 Four Oyo State cops were admitted to a hospital after being injured in a clash between the police and students of the Federal College of Agriculture, Moor Plantation, Apata, Ibadan, on Monday, in a statement released by the Oyo State Commissioner of Police, Abiodun Odude.

The commissioner added that eight police vans were also damaged in the clash.

PUNCH Metro learnt that the students trooped to the Ibadan-Abeokuta Expressway around 6.30am, blocking the main road linking Oyo and Ogun states, with many motorists forced to take alternative routes to their destinations.

It was learnt that the rector invited the police when the students, who were protesting against the school management, blocked the main road.

A lecturer in the school, who spoke on condition of anonymity, said the issue had been on for more than one year.

She said, “There have been clashes between the provost and lecturers of the school. Some lecturers were suspended, while some claimed their allowances were withheld by the provost illegally.

While revealing that the police had arrested five students for their involvement in the clash, Odude said there had been several meetings between the school authorities, the students and the police on how to resolve the crises in the school.

He said, “It has been an off and on situation. We have been on this for the past six months, meeting them and trying to resolve the issues. We have met the students’ union leaders and the school authorities.

“We told the students that they should limit their activities within the school because once you deprive others the use of a public facility, you are against the law. Today (Monday), they blocked the main road during their protest and we sent some policemen there. But they became violent and attacked the policemen.

“Four policemen were injured and they are now in the hospital. Eight police vans were damaged too. We had to use force to push them back into the school. That you are a student does not give you the liberty to break laws. Those who were arrested will be charged to court at the end of investigations.”

The students, however, claimed that the police shot at them during the protest with some of them sustaining gunshot injuries. They also said a lecturer was injured in the melee.