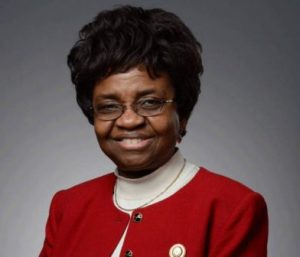 The appointment of Prof. Moji Adeyeye as the Director-General of the National Agency for Food and Drug Administration and Control (NAFDAC) has been approved by President Muhammadu Buhari.

This was contained in a statement on Tuesday by Assistant Director (Press), Office of the Secretary to the Government of the Federation, Mohammed Nakorji.

According to the statement, Adeyeye’s appointment which takes effect from November 3 is for the initial term of five years.

The statement read, “The President of the Federal Republic of Nigeria, His Excellency, Muhammadu Buhari, GCFR, has approved the appointment of PROFESSOR MOJI CHRISTIANAH ADEYEYE, as the Director-General of National Agency for Food and Drug Administration and Control.

“ Moji Christianah Adeyeye is a seasoned Pharmacist with a proven track record of accomplishments in Nigeria and abroad.

“She is also a Professor of Pharmaceuticals, Manufacturing Science and Drug Product Evaluation, College of Pharmacy, Roosevelt University, USA amongst others.

“The appointment, which takes effect from 3rd November 2017, is for the initial term of five (5) years.”