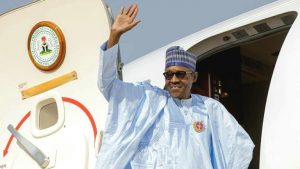 The President was received at the Houphet Airport by Ivoiren President Alassane Ouattara.

Those on the President’s entourage include governors Emmanuel Udom of Akwa Ibom and Mohammed Abubakar of Bauchi State, Asiwaju Ahmed Tinubu, as well as some ministers.

The Minister of Foreign Affairs, Geoffrey Onyeama, led the Nigerian delegation to receive the president at the airport.

Others at the airport included Nigeria’s ambassador, Ibrahim Isa; Senior Special Assistant on Diaspora Affairs, Abike Dabiri-Erewa; and some embassy officials, as well as representatives of Nigerians resident in Cote d Ivoire.

A statement earlier issued by Femi Adesina, the Special Adviser on Media and Publicity to the President, said Mr. Buhari would participate in working sessions on the summit theme: “Investing in Youth for Sustainable Development.”

He said that on the margins of the summit, Mr. Buhari would meet with a number of African Heads of State and their EU counterparts.

PDP: We Will Not Allow Judiciary Become Departments Of APC The Peoples Democratic Party (PDP) says it is ready to explore all constitutional means to...
Read more
- Advertisement -