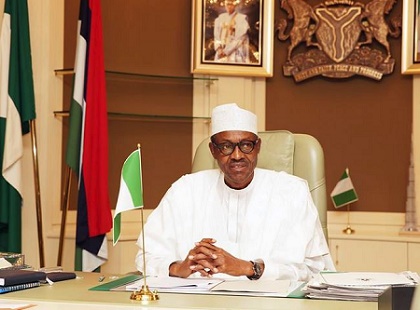 Mr Muhammadu Buhari, the president of Nigeria, has given the clearest hint so far that he will seek re election in 2019.
According to Premium Times, the man gave the hint in far away Abidjan, Cote d’Ivoire where he is attending the 5th European Union-African Union (EU-AU) Summit.
He was accompanied on the trip by a leader of the governing APC, Bola Tinubu, and governors Udom Emmanuel of Akwa Ibom and Mohammed Abubakar of Bauchi states among others.
The president arrived late to an interactive session with the Nigerian community in Cote d’Ivoire Tuesday night and said he had to wait for the two governors to accompany him to the meeting because of their electoral value.
“First I want to apologise for keeping you for too long sitting, this is because I insisted on the governors attending this meeting.
“This is why I came along with them so that when we are going to meet you, when you are going to meet the rest of Nigerians, if you tell them that their governors were in the company of the president, I think that will be another vote for me in the future. I’m very pleased that they were able to turn up,” Mr. Buhari said to thunderous laughter and clapping by the audience.
Mr. Buhari had during his inauguration on May 29, 2015 stated that he will be for everybody as well as for nobody.
He reiterated that position on Tuesday, saying that was responsible for his support of Akinwumi Adesina to emerge as the President of African Development Bank, AfDB, despite serving as a minister in a PDP-led administration.
Mr. Buhari was reacting to Mr. Adesina’s remark earlier expressing gratitude for the support he received in his bid to emerge as the AfDB president.
Mr. Buhari had shortly after assumption of office dispatched former Vice President Atiku Abubakar to lobby President Jacob Zuma of South Africa to support the candidature of Mr. Adesina, a move that was key in getting the former Minister of Agriculture the job.
Mr. Adesina is the first Nigerian to head the continental bank since it was set up in 1964.
“The President of the African Development Bank (AfDB), who forgot to mention that he was serving in the PDP government as minister but all the same I picked him and recommended him for AfDB.
“I think it emphasised what I said during my swearing in that I am for everybody and I am for nobody. As long as you are a Nigerian, be prepared to be on the receiving end from me,” the president said.
Mr. Buhari also told the audience that he just received “a beautiful piece of information” from Mr. Tinubu which he was never aware of. He thanked the APC leader for the information.
He however, did not disclose what the information was.
“I also thank our leader, Asiwaju Bola Ahmed Tinubu. He has brought me a very beautiful piece of information, which I was not aware of it until I sat down and read it this evening (Tuesday night). Thank you very much for your hard work and I will discuss that paper with you.”
Mr. Adesina in his remarks noted that the the Nigerian economy picked up soon after Mr. Buhari’s health challenges appeared over, adding that “so it seems there is a correlation between the President’s health and the improved economy.”
On security, Mr. Adesina said the bank has released $250 million for the construction and rehabilitation of the North-east, destroyed by Boko Haram insurgents.
He also said the AfDB has constructed a big building behind the Yar’Adua Centre in Abuja, which will serve as its office in Nigeria.
He said it is the first of such buildings by AfDB outside its Abidjan headquarters, which he will want President Buhari to commission.
“I want to thank you immensely. I want to thank God for your health because I must say that for all of us that has been a big concern. But seeing you fit as a fiddle and seeing you back in action, we thank God for that and may God continue to give you great strength.
“Mr. President as you must have noticed, there is a very strong correlation between your health and the economy and when you came back the economy picked up after that. So we wish you great health so that the the economy can continue to pick.
“I also want to congratulate you for the economic growth and recovery plan that you have put in place and the incredible plan that you have put in place to bring the economy out of recession and also in terms of the fact that Nigeria has moved up in the World Bank ease of doing business index.
“It is to your leadership, vision and commitment that we want to from the African Development Bank commend you, Mr. President, and to assure you of our strong support behind you and your government for the efforts to try and move Nigeria forward. We are solidly behind you, you can count on that.
“I also want to thank you for your leadership on the Boko Haram issue because to draw investments into Nigeria, you absolutely have to have security.
“I think that securing our borders is very very important thanks to your leadership for that. I also thank you for all the efforts you have made in the Lake Chad Basin Area.
“I was with you in Paris where you led the efforts in reviving the Lake Chad Basin. As you know Mr. President, the bank is very strongly behind that. We put in $250 million to support the North-east of Nigeria rebuilding. I know you were criticized for rebuilding but I don’t see anything wrong, if things get destroyed they have to be rebuilt and the African Development Bank has contributed $250 million towards that,” Mr. Adesina said.