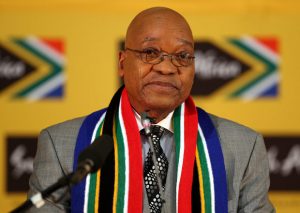 President Jacob Zuma of South Africa and his Angolan counterpart, Joao Lourenco, will travel on Wednesday to Zimbabwe, where 93-year-old President Robert Mugabe is under growing pressure to resign, this was confirmed by the South Africa’s state broadcasting station.

President Zuma, as chair of the Southern African Development Community (SADC), had earlier deployed a team to Zimbabwe.

The team was be led by Defence Minister Nosiviwe Mapisa-Nqakula and State Security Minister Bongani Bongo.

“The Special Envoys were sent to the Republic of Angola to see President Lourenco, Chairperson of the SADC Organ on Politics, Defence and Security to brief him on the situation,” the presidency said in a statement.

Mr. Mugabe and his family have been under military guard as the army also took over the state broadcaster earlier.

Mr. Zuma reiterated his earlier calls for calm and restraint in Zimbabwe.

Meanwhile, parliament Speaker Jacob Mudenda said he received a motion to impeach the president and the parliament would adjourn to a hotel to start the proceedings on Tuesday afternoon.

Mr. Mugabe led Zimbabwe’s liberation war and is hailed as one of Africa’s founding fathers and a staunch supporter of the drive to free neighbouring South Africa from apartheid in 1994.

Many people in Africa and beyond also say he has damaged Zimbabwe’s economy, democracy and judiciary by staying in power for too long and has used violence to crush perceived political opponents.