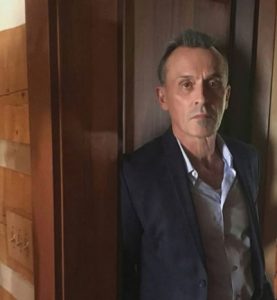 Popular Hollywood actor Robert Knepper, who played T-Bag in the popular series, Prison Break has been accused of assaulting popular costume designer on a film set in 1991.

Bertram alleged that actor Knepper sexually assaulted her during the filming of the 1992 Allison Anders drama Gas Food Lodging.

The decision to begin telling her story predated the Weinstein allegations, Bertram tells The Hollywood Reporter in an article written by John Scott. She said she was spurred to face the past after the October 2016 release of the infamous Access Hollywood tapes, in which then-candidate Donald Trump discussed his tactics with women.

“I kind of buried it for a long time until Trump came out with his ‘Grab ’em by the pussy’ thing. When that happened, I started reeling,” she said, “People think that’s a joke, but that really happened to me.”

Bertram, who was 31 at the time of the alleged 1991 assault, said she was a newcomer to the industry when Anders hired her “out of the blue” to work on Gas Food Lodging. After a day of shooting at a truck stop near Deming, New Mexico, Bertram said she went to Knepper’s trailer to drop off some clothes for the actor. Her hands were full, she says, and she had to lean over to reach a rack on a far wall. That’s when she says Knepper “jumped up,” reached under her dress and grabbed her crotch “as hard as he could.”

The costumier said she dropped everything. Knepper, she says, shoved her against the wall, and said, “I’m going to fuck your brains out.” Bertram says she struggled free and managed to push him off, shouting “I’m working, I’m working!”

“I flew out of that trailer as fast as I could. I just kind of fell out the door, and landed in the dirt on my knees,” she said.

Bertram ran to a bathroom and locked the door. She says she reached under her dress and saw that the crotch of her tights had been ripped, and she was bleeding. Knepper, she claims, had gouged at her vulva during the assault and a piece of her flesh and some pubic hair had been torn out. “I just sat there and cried for a while. My dress was torn, I was dirty,” she recalled during an interview, “I just sat there and got myself together and went back to the wardrobe trailer.”

There, she told her then-assistant, Dominique DuBois, what had happened, an account DuBois corroborates. “I remember Susan came in and she was visibly shaking,” DuBois said, “She told me [Robert Knepper] had forced himself on her. She was very upset, very shaken. I do remember that.”

DuBois said she still feels bad that she didn’t do more in response. But both she and Bertram say they didn’t feel empowered to say much. “We didn’t have any protections back then,” said Bertram, “I was young, it was one of my first jobs in the industry, I was a long way from home.”

Knepper is best known for his roles in the Golden Globe-nominated Fox hit Prison Break, as well as 2007’s Hitman and 2008’s Transporter 3. He’s also nabbed recent roles in Homeland, the Jack Reacher movies and The Hunger Games: Mockingjay — Part 2. Allison Anders declined to comment for this story.

Bertram’s allegation is the latest in a wave of sexual assault and harassment cases that continues to rock Hollywood and the media world. The outpouring of stories of bad behaviour by powerful men began with the downfall of Harvey Weinstein, who now stands accused of some form of harassment by upwards of 90 women. Since then, actor Kevin Spacey and directors James Toback and Brett Ratner have also come under scrutiny as allegations mount.

“Even if I had said something, what were they going to do? Fire their lead actor?” says Bertram, who recently worked on the Warner Bros. horror feature Annabelle: Creation and horror comedy A Haunted House. “It would have been a fucking joke. That would have been true until really recently. A lot has changed in the last few weeks.”

After the story was published on Hollywood Reporter, Knepper released a statement addressing the allegation: “Over the past few weeks, my wife and I have discussed the pain women have experienced and the bravery they have shown in coming forward. I am shocked and devastated to be falsely accused of violence against a woman. That’s just not who I am. To those who have reached out today with words of support and encouragement, I thank you from the bottom of my heart.”