Home News Feed Protesters Storm National Assembly As IG Of Police Appears Before Senate |...
Facebook
Twitter
WhatsApp
Hundreds of protesters on Wednesday afternoon occupied the entrance of the National Assembly, as the Inspector General of Police, Ibrahim Idris, appears before the Senate.
The Inspector General of Police (IGP), Ibrahim Idris, has on Wednesday, appeared before a senate ad hoc committee investigating some allegations levelled against him by a senator representing Bauchi central, Isah Misau.
The senator had accused the IG of Police of illegally receiving money from oil companies where police officers were sent to provide security. Misau also claimed that the IG is also having affair with two policewomen whom he gave special promotion.
Following allegations raised by the lawmaker, the upper legislative chamber set up the committee on October 4, and last week Wednesday, the committee led by a senator representing Edo north, Francis Alimikhena, threatened to issue an arrest warrant on the IGP after he failed to appear before the committee.
Meanwhile as the IG of Police later embraced the summon and appeared before the lawmakers today, hundreds of protesters this afternoon occupied the entrance of the National Assembly to show solidarity with the Inspector General of Police, Ibrahim Idris.
The convener of the protest, Gloria Ugbeji, said such solidarity march is important based on the various reforms she said the police chief has brought to the service.
She said it is important for Mr. Idris to be “left alone to focus on what he is doing.” 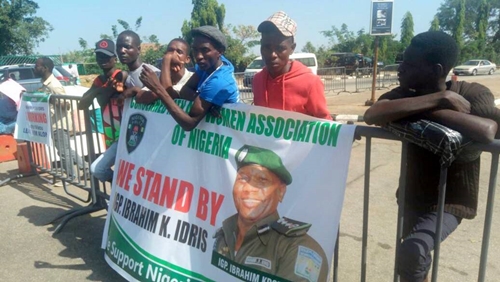 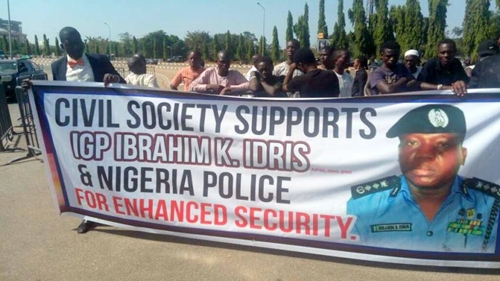 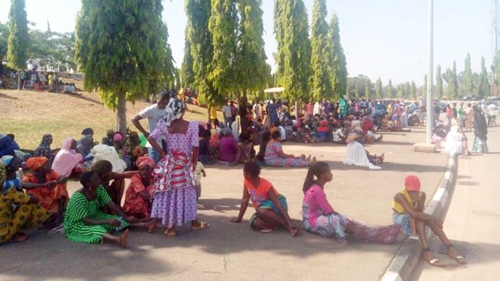