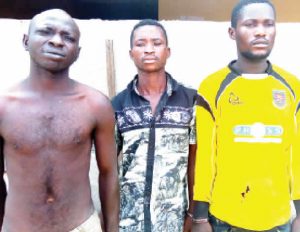 There was unrest and confusion in Bayelsa State the as ten robbery suspects on Monday escaped from a cell of the Special Anti-Robbery Squad of the Bayelsa State Police Command in Yenagoa, the state capital.

Five of the robbery suspects, have been re-arrested in Yenagoa and Agbura, on the outskirts of the state capital, on Tuesday.

It was learnt that the re-arrest of the five suspects followed an order of a manhunt by the state Commissioner of Police, Mr. Asuquo Amba.

It was learnt that some inmates of the SARS detention cell, led by one Touch-Touch, cut the iron protector at the toilet in one of the cells and escaped through the ceiling of the building without being noticed by operatives on duty.

The incident, which was said to have occurred at about 10pm on Monday, was discovered when a security official of the Yenagoa Local Government Area, raised the alarm on noticing strange persons jumping into the council’s premises from the SARS headquarters.

It was learnt that two of the fleeing suspects were arrested at Agbura community, where they were hiding, while three others were arrested in an open field of an unnamed company.

A security guard of the abandoned company was said to have called the emergency number of the police, which led to the arrest of the three fleeing suspects on the company’s premises.

Some legal practitioners in the state blamed the incident on the poor condition of the detention facility located along the Federal Road Safety Corps Road in Yenagoa.

Butswat, a Deputy Superintendent of Police, said, “At about 2am, November 7, 2017, the Incident Duty Officer of the Special Anti-Robbery Squad, while on routine cell check, discovered that 10 suspects escaped through the ceiling of the SARS detention facility.

“Policemen immediately cordoned off the detention facility and re-arrested three out of the 10 suspects that escaped. The profiles of the suspects have been circulated to our intelligence sources and efforts have been intensified to re-arrest the remaining suspects.’’

The spokesman urged members of the public not to panic but volunteer useful information that would assist the police in arresting the fleeing suspects.

He said three of the suspects who were arrested in Yenagoa were one Theophilus, 22; New Year, 21; and Jamilu Buhari, 27.

“The three re-arrested suspects were sleeping at about 10pm on Monday when they heard detainees escaping and they took advantage of the situation,’’ Butswat added.