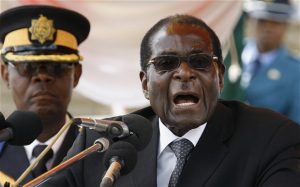 Former President of Zimbabwe, Robert Mugabe and his wife Grace are to receive £7.5 million as well as immunity from prosecution as part of a reported “golden goodbye” package.

According to msn.com report, the 93-year-old resigned after 37 years in power, is said to have struck a bargain with the military to allow him and his wife to enjoy their retirement in the lap of luxury in Zimbabwe rather than being forced into exile.

Mr Mugabe will continue to enjoy full military protection as a former head of state as well as his full presidential salary of £112,500 a year until his death, local media reported.

“Gucci Grace”, Mugabe’s wife, more than 40 years younger than her husband, will continue to receive half of his salary after his death.

According to reports, Mr Mugabe negotiated the exit package for himself and his 52-year-old wife through a team of mediators who included a Catholic priest.

A source told the Zimbabwe Independent: “Government will give him a £3.75m lump sum and then the remainder will be paid out in instalments.

“Mugabe will also enjoy full medical cover as well as his monthly salary. In the event of his death, his wife will be given half (of his) salary per month.”

Sources claimed that shortly after Mr Mugabe tendered his resignation following the takeover and impeachment proceedings against him, Commander of the Presidential Guard, Brigadier-General Anselem Sanyatwe, called for an emergency Joint Operations Command meeting with uniformed officers.

“We were told that the President had resigned, but that he was granted full immunity. Sanyatwe informed us that Mugabe will continue to enjoy protection as a former head of state,” the unnamed source reportedly told the newspaper.

Mr Mugabe’s 37-year rule, characterised by corruption and oppression, left Zimbabwe with an impoverished population, an unemployment rate of 80 per cent, a virtually worthless currency and crippling debts.

His successor, 75-year-old Emmerson Mnangagwa, a long-time Mugabe ally in the ruling Zanu-PF party, was sworn in on Friday promising a new era, despite widespread fears he will offer more of the same.

He has urged Zimbabweans not to carry out any type of “vengeful retribution” against the former president and praised the “immense contribution” Mugabe had made to the country.