Deolu
A Nigerian man has had his marriage dissolved after he reportedly assaulted his wife by throwing her into a soak-away pit. 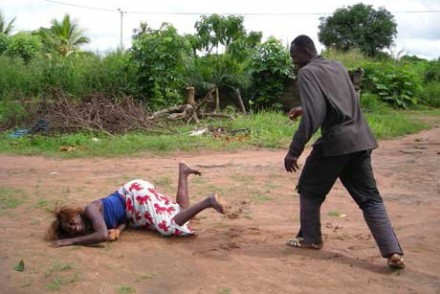 A housewife, Fausat Akinola, on Thursday told a Grade `C’ Customary Court, Agodi in Ibadan, that her husband of 15 years, one Sarafa Akinola, used to tie her to a tree in front of their house.
Fausat, a mother of three, said this when testifying before the court in a divorce suit filed by her husband.
“My lord, I support the dissolution of the marriage because my husband used to tie me to a tree in our compound.
“Even there was a day he threw me inside a soak away and I was rescued by a neighbour.
“He treated me like a slave and was in the habit of beating me whenever we had misunderstandings.
“Dissolution of the marriage is a freedom from brutality and it will save me from untimely death though I have packed out of his house.’’ Fausat said.
Earlier, Sarafa, who instituted the divorce suit, had told the court that the defendant was very stubborn and never behaved like an obedient housewife.
He said Fausat and his three children packed out of his house to an unknown destination without notifying him. He urged the court to order his wife to bring the kids back to him so that he could take care of them.
He also denied the allegation of tying her, saying that he never threw her into a soak away.
In his judgment, Chief Mukaila Balogun, the President of the court, said there was no basis to deny the divorce request, since both parties had agreed to end the union.
Balogun, therefore, dissolved the marriage and gave the custody of the three children to the plaintiff. He said the evidence of the defendant showed that she would not be able to take care of the children.
Balogun ordered the plaintiff to properly take care of the children morally and financially.