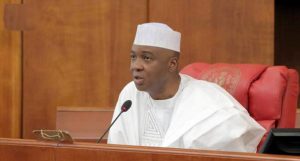 According to the Senate President, in a statement by his Special Adviser on Media and Publicity, Mr. Yusuph Olaniyonu, in Abuja, lauded the ex-President’s contribution to the progress of democracy and overall development of the country.

He described Jonathan as a leader “whose decision to peacefully exit power following the results of the 2015 presidential election would remain indelible in the annals of the country.”