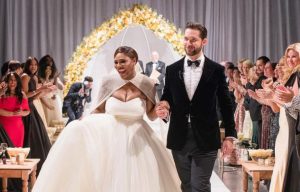 The ceremony came weeks after the birth of their daughter, Alexis Olympia Ohanian Jr.

Mr. Ohanian shared a photo of the wedding with a heartfelt message.

“@serenawilliams: You are the greatest of all time, not just in sport–I’m talking about as a mother and as a wife. I am so excited to write so many more chapters of our fairy tale together. And my whole life I didn’t even realize it, but I was waiting for this moment. And everything that I have done, everything that I am so proud of in my career, and in my life, for the last 34 years, pales in comparison to what we’re doing today. And I am so grateful, and I am so in love. 📸 @[email protected]”, he said.

According the SKY News, the couple met by chance at a hotel in Rome. While she was there to play in the Italian open, he was there for a conference.

About 18 months later, Mr. Ohanian proposed to her in the same hotel and at the same table where they first met.