Dancehall artiste Charles Nii Armah popularly known as Shatta Wale is one man that really loves to always be in the spotlight. – The self-acclaimed dance hall king has been the most talked about Ghanaian musician over the past month. – His visit to President Akufo-Addo became big news while his recent ‘beef’ with Nigerian act Wizkid is still very much trending.

Earlier reported the news of the brewing beef between Ghanaian musician and Wizkid. However, dancehall artiste Shatta Wale is set to enjoy some positive controversy after deciding to flaunt his fleet of cars to the world. In a short six seconds video posted on his Facebook page, the 2014 VGMA Artiste of the Year showed off his latest BMW ride while also making sure that his numerous cars were also captured. Of course Shatta Wale is not new to getting new cars, just last month he was given a brand new G-Wagon as birthday gift by the CEO of EIB Network, Bola Ray. 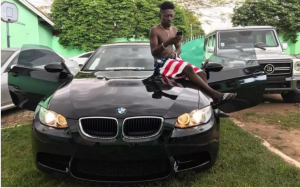 Share
Facebook
Twitter
WhatsApp
Previous articleLOL! Producer Masterkraft photoshops a picture of himself wearing Ebuka’s agbada
Next articleWoman Reveals How She Discovered Her Daughter Was Being Abused By Her Father | Shares The Formula
- Advertisement -