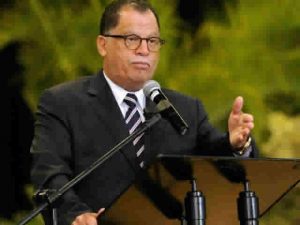 South Africa’s football association president Danny Jordaan has denied raping a former lawmaker and singer who made allegations as part of the #MeToo social media movement against sexual assault.

Jennifer Ferguson claimed online that Jordaan, who was responsible for organising the 2010 World Cup and also sits on the Confederation of African Football’s executive committee, raped her in hotel room in 1993.

“Dr Jordaan denies that he raped Ms Ferguson,” his lawyer Mamodupi Mohlala-Mulaudzi said in a statement.

“We have accordingly, as his attorneys, advised Dr Jordaan that he must not participate in a public discourse of the allegation made against him by Ms Ferguson.

“From a legal viewpoint, serious allegations of the kind made by Ms Ferguson can only be ventilated in a court of law, where the rights of all parties are protected.”

Ferguson, who was a parliamentarian for the ruling African National Congress party, alleged on Facebook last month that Jordaan had attacked her in a hotel room in Port Elizabeth on South Africa’s south coast where he subsequently served as mayor.

“He entered and without a word grabbed me and forced me onto the bed from behind. He overpowered me and painfully raped me,” she wrote in a blog post following her Facebook disclosures.

She posted with the “#MeToo” tag that has been widely used on social media by women — and some men — to condemn sexual harassment and report incidents of assault in the wake of the allegations made against Harvey Weinstein.

“Dr Jordaan’s perceived silence in the face of such serious allegations is because of his empathy with the victims of gender-based violence,” said the statement issued on Jordaan’s behalf.

“Dr Jordaan has, however, after careful consideration decided to assert his innocence.”